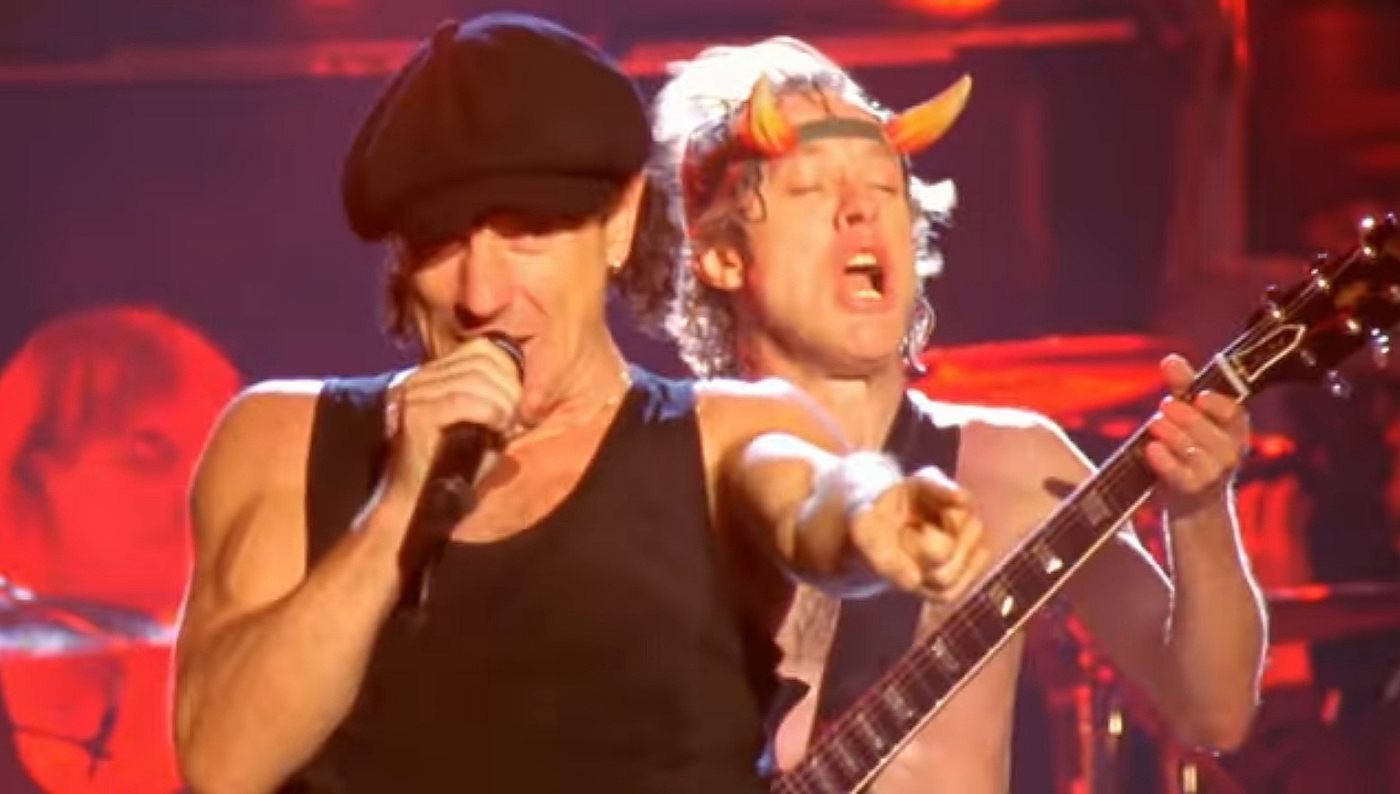 So in late September 2020, I did a post talking about which songs AC/DC should add to their setlist, so if you haven’t checked that out, you can click the link here! Since then, the band announced that drummer Phil Rudd, bassist Cliff Williams, and vocalist Brian Johnson were back in the band; and they released a new album in November 2020 titled Power Up. Due to the ongoing COVID-19 pandemic, the band hasn’t announced any gigs at the moment, but there is hope that they could possibly do one more tour. With that said, I’ve created my dream setlist for AC/DC, as if it were a gig promoting the band’s Power Up album. So, let’s get on with the music!

Because AC/DC has never toured in Hawaii, we’re going to change that by making the band do a gig at Aloha Stadium; with the band’s popularity, they need a big venue to hold all of their fans. The concert starts at 8:00 p.m. and the intro to “Rock ‘n’ Roll Train” from Black Ice (2008) gets the crowd going. Everyone stands up and starts losing their mind as Angus Young runs out on stage, Johnson smiles at the crowd, Stevie Young prepares to do his uncle proud, Rudd puts his game face on, and Williams does his best to stay out of Angus’ way. After starting off on a high note, the band performs “Let’s Get It Up,” one of my favorites from For Those About to Rock (1981). When Axl Rose toured with AC/DC to finish off the Rock or Bust tour in 2016, he convinced the guys to bring back some old favorites, one of them being “Live Wire” from High Voltage (1976), which is the next song on the agenda.

Johnson then tells the audience that it’s time to do a song off their most recent album, so they perform “Realize;” I prefer that one over “Shot in the Dark.” From 2020 to 1978, the band shifts gears and performs “Down Payment Blues” from Powerage. The rarities keep on coming as AC/DC then performs “Burnin’ Alive” from my favorite album of theirs, Ballbreaker (1995). Next up is “What Do You Do For Money Honey” from Back in Black (1980) because it’s too dang good to ignore. Since this tour takes place in summer 2022, when COVID-19 is long gone, it makes the perfect segway into the next song, “Rock the Blues Away” from Rock or Bust (2014).

The next thing I know, the intro to “Gone Shootin,’” another track from Powerage (1978), begins and the crowd goes bananas; I don’t even know where I am anymore as I’m banging my head to the groove. Could this get any better? Yes, because for Angus’ striptease, the band brings back “Jailbreak” from the Australian version of Dirty Deeds (1976); get ready for a 15 minute long guitar solo, baby! Now, it’s time for some Flick of the Switch (1983) and the song is title track; even if the casual fans don’t know it, that riff is bada** that they have to love it! The fingering is a bit complicated, but Stevie loves the challenge. To kick it up a notch, the band performs “Girls Got Rhythm” from Highway to Hell (1979), which they haven’t played since the Ballbreaker tour.

All of a sudden, the screens show a montage of the band through the years and the band performs “Through the Mists of Time” from Power Up, an emotional, yet beautiful performance. After everyone cries their eyes out, it’s time to pump people up again by performing “Satellite Blues” from Stiff Upper Lip (2000). At this point, the crowd is probably going to get annoyed if AC/DC doesn’t play “Thunderstruck” from The Razors Edge (1990), so that’s exactly what the boys do next. Fight me on this, but I prefer Rudd’s playing on “Thunderstruck” rather than Chris Slade’s busy playing, which is odd because Rudd wasn’t around when the song was released. On the topic of thunder, next up is “Got Some Rock & Roll Thunder,” another track from Rock or Bust; it’s time for Rudd to show Slade how to work a hi-hat.

Going back to Flick of the Switch, the band then plays “Bedlam in Belgium” because why not?!?! Let’s go back one album further and have the band play another track from For Those About to Rock, how about “Inject the Venom”? With Rudd on drums, heck yeah! Next up, the band plays “Shake Your Foundations,” a kicka** song from Fly on the Wall (1985), a truly underrated album. Flash forward to 1995, again, the band performs “Hard as a Rock” from Ballbreaker, which they haven’t performed since 2003. We are now at the portion of the show where Rudd goes full human metronome mode and the band jams out to “Let There Be Rock” from the 1977 album of the same name; be prepared for another massive, long guitar solo.

After “Let There Be Rock,” the band goes backstage to cool down before returning for the encore. Of course, we have to include “T.N.T.” from High Voltage because it’s a must at an AC/DC show; my lungs were born ready! To keep the adrenaline going, the second to the last track is “High Voltage,” also from the 1976 album of the same name. Unfortunately, the show must come to an end and what better way to close the show than with “For Those About to Rock (We Salute You)”? Those cannons are mighty loud and I could lose my hearing the following day, but who cares! I just witnessed the best AC/DC concert ever!

Unlike my dream setlist for Def Leppard, I picked a lot of singles that the casual fans could get into and most of these tracks were performed live. However, I also wanted to focus more on the Brian Johnson era of AC/DC because besides stuff from Back in Black, the band mainly focused on the Bon Scott era. While the Def Leppard setlist included ALL of the songs I wish to hear live from the band, the AC/DC setlist only included some of the songs I wish to hear live. In the end, I’m still happy with the songs I picked. I know Johnson’s voice died down over the years, but if the band performs the songs in a lower key, Johnson can pull it off!

Feel free to comment below your dream setlist for AC/DC!

64 thoughts on “My Dream Setlist for AC/DC”