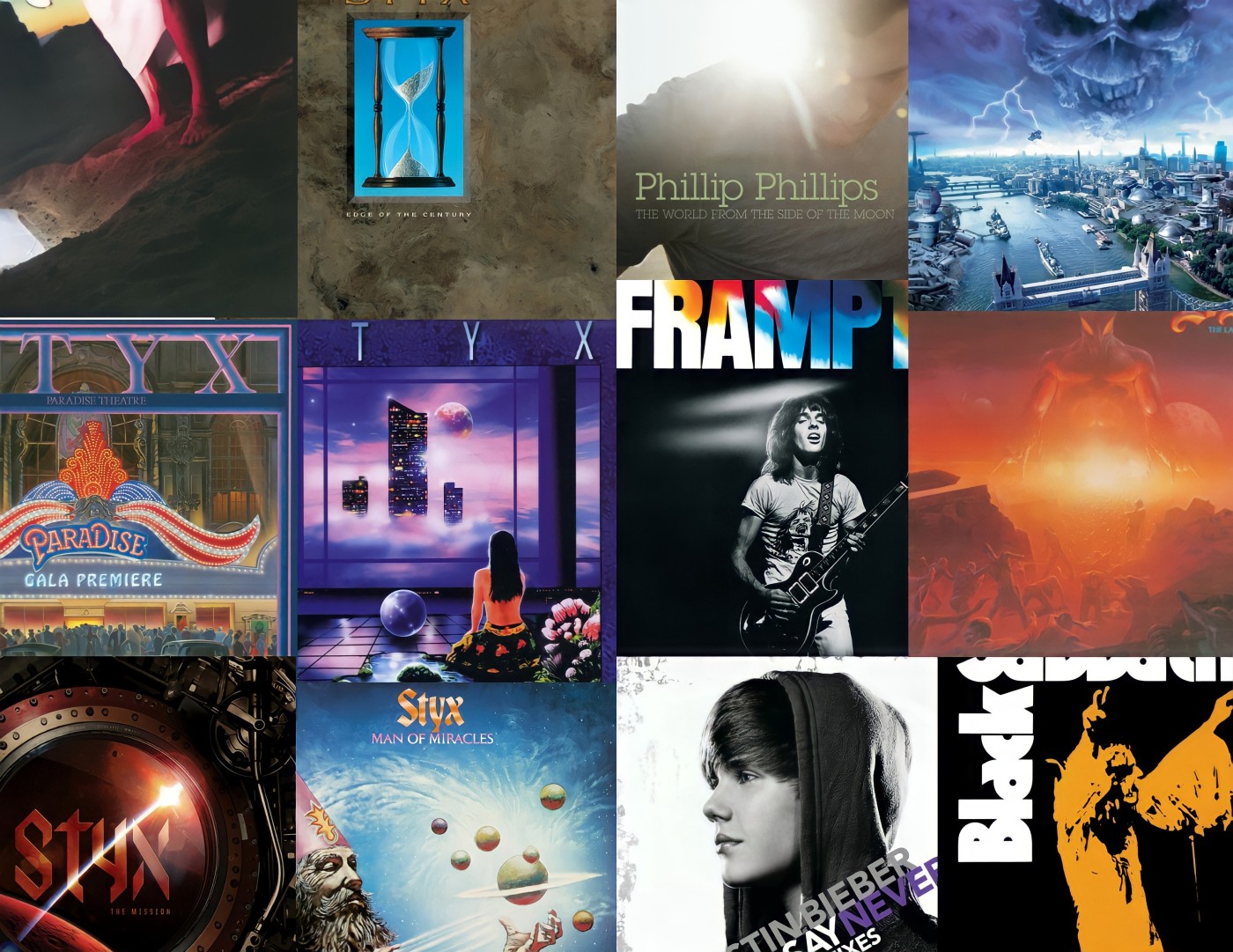 It’s time for another edition of the Songs with the Same Title series and we’re moving onto an American rock band called Styx. I previously took on another American rock band called Journey, so if you haven’t already, feel free to check out that post here! So, there are six rounds total and in each round, I’ll compare two songs (one by the respective artist and one by a different artist) and pick my favorite of the two. After the final round, I’ll tally up the score and pick the winner of the overall battle. With all that said, let’s get on with the music!

I love the talkbox on Peter Frampton’s “Show Me the Way,” but I hate how simple the chorus is. The lyrics for Styx’s “Show Me the Way” are more in-depth and poetic, somewhat depressing, but I like the effort these guys put into the song. Both songs are really different; the former is a laid-back, fun tune for a gig, while the latter is a more gravitating and religious experience. I also enjoy the harmonies in the chorus for Styx’s song, therefore, they take the win for round one.

The highlight of Styx’s “Evil Eyes” was the bass riff in the instrumental before the last chorus. Other than that, the song is boring and thank goodness it’s only four minutes; if it was any longer, I would’ve fallen asleep. The lyrics describe a man loving a woman that is no good for him. As mentioned in my review for Dio’s The Last in Line (1984), I hate the lyrics for “Evil Eyes,” but instrumentally, it rocks! Also, it’s hard to fall asleep listening to Ronnie James Dio, so Dio takes the win for round two.

As mentioned in my review for Iron Maiden’s Brave New World (2000), the title track has a cool guitar solo, but it repeats “brave new world” way too many times and the song already drags on forever. Styx’s “Brave New World” has a cool futuristic melody, which fits the theme of the song, and man, Tommy Shaw has a great recording voice. It has a gravitating chorus, which doesn’t repeat the same line over and over again, and I love the lyrics, especially the line in the intro “The lines are drawn in the sand across the caress of time.” Styx redeemed themselves after the last round, so they take the win for round three.

The only thing that I didn’t like about Styx’s “Never Say Never” was the harmonies in the chorus; other than that, I thought it was a cute song. However, Justin Bieber’s “Never Say Never” is a banger, with an uplifting message of never giving up when things get tough. I did a parody of this song for Spanish class in high school and I messed up on the rap section because I couldn’t stop laughing, haha. So everytime I sing “Never Say Never,” I’m like, “ok, I can’t mess up on the rap section!” It’s easier to sing a song in private, rather than in front of people. Because of my history with Justin Bieber (the old stuff), he takes the win for round four.

Phillip Phillips’ “Gone, Gone, Gone” used to play on American Idol during the contestants’ montage videos when they get sent home, which is strange because it’s a love song. It’s still a catchy tune and I love the lyrics, especially that line, “Like a drum, baby, don’t stop beating.” I still believe that Phillip Phillips only won American Idol because he was cute, but that just proves how messed up the show was. Styx’s “Gone Gone Gone” has an aggressive, kick you in the face guitar riff and it’s awesome! Unlike Phillips’ love song, Styx’s song has the message of seizing the day and kicking some butt (ok, maybe the latter was an exaggeration). Styx’s “Gone Gone Gone” is a bit short, but it left me wanting more, rather than wanting the song to be over, so Styx takes the win for round five.

I’m still not a fan of Ozzy Osbourne’s vocals, but I love the darkness of Black Sabbath’s “Snowblind.” Also, Bill Ward’s drumming added so much flavor to the track.” Styx’s lead vocals for “Snowblind” were shared by James Young in the verses and Shaw in the chorus. Both songs deal with the downsides of cocaine addiction and it was so hard to pick between the two because both are fantastic tracks. However, I have to go with Styx’s “Snowblind” because it picks up the pace and sounds like it could be played in a fancy bar (meaning not really a headbanger, but it’s a swaying your head to the beat type of song). So, Styx takes the win for the final round.

Styx won four of the six rounds, which is not bad, so they take the win for the overall battle.

27 thoughts on “Songs with the Same Title – Styx Edition”

Today (9/26/22), I saw animals, rode 'DINOSAUR' in the front row, rode 'Expedition Everest' twice, saw 'Festival of the Lion King' for the first time, and met Chip and Dale in their dinosaur costumes! It's been a hot minute since I've been to Animal Kingdom and despite the rain later in the evening, I had a fantastic time there. 💚🦁 I didn't get to do 'Flight of Pasaage,' though. So, I'll have to do that one next time! 👍
Monday, September 12, 2022 was a magical day at Magic Kingdom. ❤️ It started with meeting Mickey and Minnie at Town Square Theater in their WDW 50th anniversary outfits and it ended with dinner at Cinderella’s Royal Table with my friend from the Disney Ohana Club and her mom! 🎆 I also did a couple of attractions I’ve never done before, which were ‘The Magic Carpets of Aladdin’ and ‘Walt Disney’s Carousel of Progress.’ The latter had a rotating theater that freaked me out greatly. 😨 Oh yeah, did I mention that I met Cinderella too?!?! Head over to my blog now to read the full post (link is in my bio)!
Tuesday, August 30, 2022 was a special day for me because I got to attend Mickey's Not-So-Scary Halloween Party for the first time! 😀 I've wanted to attend this party since I started watching Disney College Program vlogs in 2015. I did pretty much everything I wanted to do that night. 👍 I got to meet Rock 'n' Roll Stitch, ride the spooky version of 'Space Mountain,' watch the 'Disney's Not-So-Spooky Spectacular' fireworks show, the 'Hocus Pocus Villain Spelltacular' show, and 'Mickey's Boo-To-You Halloween Parade.' 🎃 Head over to my blog now to read the full post (link is in my bio)!
It’s official! Louis Tomlinson will release his second studio album, ‘Faith in the Future’ on November 11, 2022. 🎉 To kick things off, Tomlinson released the album’s first single, “Bigger Than Me,” on September 1. Then, he released the music video for it on the following day, September 2. Out of all the One Direction members' solo careers, I listen to Tomlinson's music the most because his style fits my taste and I can relate to his lyrics. 💕 In my latest blog post, I discussed my thoughts on both the release date for ‘Faith in the Future’ and the “Bigger Than Me” single. Head over to my blog now to read the full post (link is in my bio)!
Today (8/29/22) was probably the most relaxing day I've ever had at the Disney parks! 👍 I started off with breakfast at Disney's Riviera Resort and then, I took the Skyliner to Epcot to spend the afternoon with my friend Mikayla @mikayla_anne23. We both bought cute Remy big foot plushes! 🐀 Afterwards, I headed to Magic Kingdom and watched the Festival of Fantasy parade for the first time. When the parade finished, I went to the Hundred Acre Wood for a meet-and-greet with Pooh and Tigger. 🍯 Once I checked that off the list, I took my time in the park and didn't do many rides. For once, I wasn't in a rush to do the big rides like 'Splash Mountain' and 'Big Thunder Mountain Railroad.' 🎢 I just went with the flow and did what I felt like doing, which was really nice! There's nothing wrong with having a chill day at Disney World! 😊
Does modern rock music suck? 🤔 If you were to ask me that a year ago, I would’ve said yes. However, that was before I discovered Rival Sons; a young band from Long Beach, California that formed in 2009. The band released their first studio album ‘Before the Fire’ on June 9, 2009. 🔥 Standout tracks include “Tell Me Something,” “Angel,” “Pocketful of Stones,” and “Memphis Sun.” Head over to my blog now to read the full album review (the link is in my bio)!