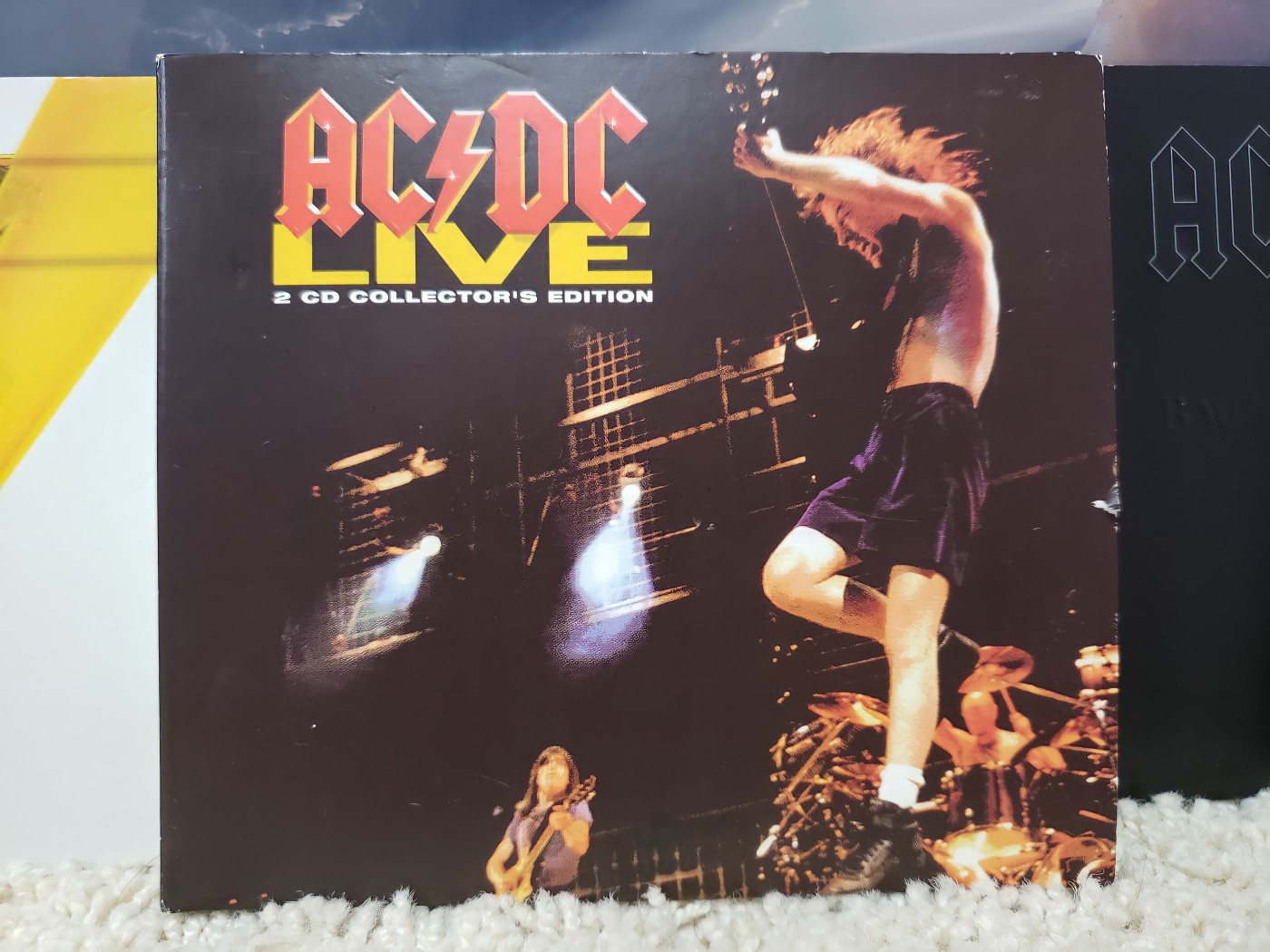 This past Friday, while helping my mom do some last-minute Christmas shopping, I went to the Book Off at Pearlridge, hoping that I’d find at least one new AC/DC album to add to my collection. It wasn’t The Razors Edge (1990), but it was something better, AC/DC Live: 2 CD Collector’s Edition (1992). As you’ve read in my previous AC/DC album review, you’d know that I wasn’t a fan of The Razors Edge, and I’m still not a fan of it, but I was willing to buy it for “Thunderstruck.” However, because AC/DC Live features live recordings of a few songs from The Razors Edge, I thought that was a good substitute!

I got the re-release from 2003, so I didn’t get an Angus buck or a poster, but I didn’t mind! I don’t need any more pictures on my wall, and I’d probably lose that buck anyway. It was $18, and though it was cheaper on Amazon ($13), I bought the Book Off one because I’ve had problems with Amazon recently, and why let good CDs go to waste? As a warning, for any music lover that wants to buy AC/DC Live, get the two-CD collector’s edition because it has more songs, including “Sin City,” “High Voltage,” and “Jailbreak.”

The setlist was another reason why I bought this live release! The band has only released three live albums throughout their career. Those are If You Want Blood You’ve Got It (1978), AC/DC Live (1992), and Live at River Plate (2012). Songs like “That’s the Way I Wanna Rock ‘n’ Roll,” “Heatseeker,” “Who Made Who,” “Moneytalks,” and “The Razors Edge” are only on AC/DC Live: 2 CD Collector’s Edition. Also, this was the first live album where Brian Johnson would cover Bon Scott’s songs. He put his unique spin on “Dirty Deeds Done Dirt Cheap,” “Sin City,” “Whole Lotta Rosie,” and “Let There Be Rock.”

Now, in terms of Chris Slade, I still don’t like him. He kept time on most of the songs, but his style is too busy for AC/DC, and he’s all about speed. Songs like “You Shook Me All Night Long,” “Whole Lotta Rosie,” and “That’s the Way I Wanna Rock ‘n’ Roll” were sped up, and it ruined the vibe of those tracks. Slade’s real screw up, however, was on “T.N.T.” The drum intro was twice as fast before dropping to the original tempo by the time the oi’s kicked in. But he wasn’t terrible on all the tracks; the bass drums on “Thunderstruck” are still badass, and I liked his rendition of “Dirty Deeds Done Dirt Cheap.”

As for the longer tracks, maybe it’s cause I’ve watched way too many live performances, but I enjoyed listening to “Let There Be Rock,” “High Voltage,” and “Jailbreak.” The latter is almost 15 minutes, while the version on Live at Donington (1992) is about 20 minutes. Because I know what happens during the song, I enjoyed listening to these recordings. I can picture Angus Young running around the stage and his brother Mal leading the rhythm section, then over the halfway mark, Angus does his striptease. Speaking of “Jailbreak,” that’s my favorite recording on the album because Malcolm Young’s guitar is loud and crystal clear; you can hear every note he plays. Plus, it’s so badass how he starts off the song with that killer riff!

“High Voltage” is another cool one because of Johnson’s screams and his crowd interaction, but also the jam session where everyone locks in with the groove, including Slade. “Who Made Who” sounds amazing live; Mal’s guitar is on fire, Johnson screeching away, Slade keeping time, Angus going nuts on the guitar as usual, and you can hear Cliff Williams (at least in the intro)! Slade’s fast tempo came in handy for “Fire Your Guns,” and the adrenaline added to the effect. The Young brothers’ guitars are piercing as ever on classics like “Shoot to Thrill,” “Highway to Hell,” “Back in Black,” and “Hells Bells.” During live performances, it’s easy to tell who’s playing what, which I like!

Final verdict: I’d give this live album 4.5 out of 5 stars. I’d also like to point out that guitar and vocal overdubs got added during post-production, and the recordings are from different dates on The Razors Edge tour, but that doesn’t change my thoughts on it.

Let me know in the comments below what you think of AC/DC Live!