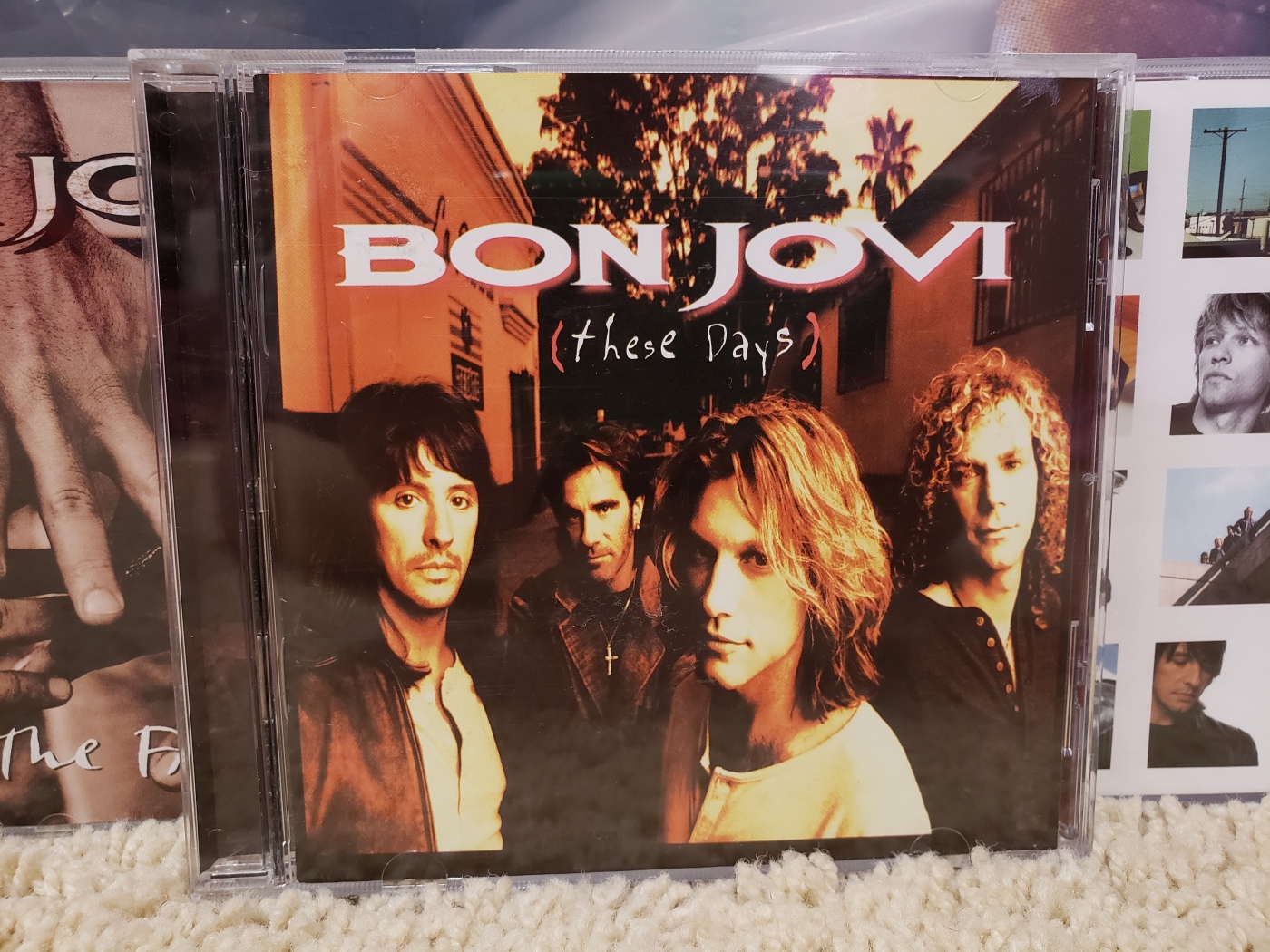 If you haven’t read my review for Bon Jovi’s Keep the Faith (1992) album, feel free to check it out here! For now, we are moving onto These Days (1995), the first Bon Jovi studio album without bassist Alec John Such, who was unofficially replaced with Hugh McDonald. The band must’ve paid him well because it took McDonald so dang long to become an official member, that I’m surprised he didn’t quit by the time Have a Nice Day (2005) came out! I mean seriously, was it so dang hard to give McDonald the recognition he deserved?!?! I was 18 years old by the time he became an official member of the band, which was in 2016.

But back to These Days, I wasn’t planning to get the album in the first place. It was April 15, 2021 and it was another trip to the Book Off. I finally worked up the courage to buy Crush (2000), pushing my ill feelings about the current Bon Jovi to the side. For that trip, I wanted to get Crush and The Circle (2009), but the latter was gone; it was there the last time I went to the mall. However, These Days suddenly appeared before my eyes and I didn’t even know it existed in real life (because I’ve only seen pictures of it).

I was tempted to get it because I’ve read good reviews on that album (especially from a certain friend on WordPress). However, the front lid of the jewel case was broken, so I was going to put it back. But I decided to take my chances and ask one of the employees to help me out. Then, the guy had this device to take off the front lid of the jewel case and replace it with a different lid. After testing out a couple of options, the guy found one that looked nice and BAM, These Days was ready to go and it was all mine! Now, with all that said, let’s get on with the music!

Holy shoot, what a way to kick off an album; “Hey God” kicks a**! Richie Sambora is slaying it on the guitar, Tico Torres is going nuts on the drums, and I love the dark tone of this track. I mean, when Jon Bon Jovi is asking God, “what the hell is going on?”, it kind of needs to sound dark! “Something for the Pain” is interesting because Sambora sings the bridge, but I had to do a double take because of the stupid “Help I’m falling / Night is calling…” nonsense. When Sambora is singing lead vocals, I want to hear him loud and clearly, don’t try to hide him with unnecessary lyrics. Other than that, the song has a great melody; I’m not crazy about the chorus, but that’s because I think the song title is cheesy.

I found “This Ain’t a Love Song” very similar to Ross Lynch’s “Not a Love Song” from Austin and Ally (2011 – 2016). However, Lynch’s song is more playful and upbeat, while Bon Jovi’s song is more bluesy and depressing (not a bad thing). Sambora brings soul to his performance, the melody is so pretty, and the lyrics are relatable; the lyrics describe someone reflecting on a love that slipped away. I first heard the title track early last year on a YouTube video of a concert from 1996; I thought it was boring. I still think it’s a boring song, despite the message it stands for (homelessness, loss of innocence, struggles in life) and nice backing vocals. However, I love when Sambora sings “These Days;” he sang it on the Lost Highway tour and brought heart and emotion to the track.

“Lie to Me” has a similar concept to One Direction’s “Tell Me a Lie,” except Bon Jovi’s track is more heartfelt and taken a lot more seriously. The lyrics are so sad: “I know I promised baby / I would be the one to make our dreams come true / I ain’t too proud of all the struggles / And the hard times we’ve been through.” It’s a beautiful song and sounds better acoustically. The backing vocals (shared by Sambora and David Bryan, I believe) are the highlights of “Lie to Me.” After all these ballads, it’s time for another song that kicks a** and “Damned” does just that! The lyrics are so dirty because it describes a guy sleeping with a woman that’s with someone else. The song is called “Damned” because of Sambora’s screeching guitar solo; I’m joking, but come on, it’s pretty epic!

“My Guitar Lies Bleeding in My Arms” makes “These Days” sound exciting. Jon doesn’t show off any range in this song and instead sings it low and almost monotone (like how Taylor Swift sings), it’s only when we get to the last chorus when Jon starts shouting on the track. The highlight of “My Guitar Lies Bleeding in My Arms” was the instrumental section before the last verse. “(It’s Hard) Letting You Go” is a filler track and it doesn’t go anywhere. Despite the “OH WOAH OH OH” part, there’s no dynamic and range, it was very low-key, so the melody is easy to fall asleep to. I also have unpleasant memories with this song because when I first played the CD, there was some dust on it, so it was stuck on the chorus and I listened to the same line for about six times, until I knew something was up.

I love “Hearts Breaking Even” because it’s fun to sway your head to the beat. Sambora’s flavorful guitar playing is top-notch and there isn’t a dull moment in the song! It has a great melody and for a song that’s about heartbreak, I don’t feel sad listening to it, instead, I want to sing this in a bar during karaoke night. I’m sorry, I can’t stand “Something to Believe In” and that “hey, hey, hey, hey” line in the background doesn’t help at all. I think that a lot of the songs Bon Jovi wrote about having hope when things get tough, excluding “Keep the Faith,” are annoying. When I listen to a rock band, I want to forget about how messed up our world is, not be reminded of it!

“If That’s What It Takes” is a cute love song about the guy willing to do anything for the girl (or vice versa). The title is a bit cheesy, but I don’t mind because the chorus is catchy and I like that the track is a complete mood change from the previous track. I think “Diamond Ring” is a decent track to close off the album because Jon and Sambora sound amazing together on the vocals. I love the low-key percussion parts and the acoustic vibe of the track. I still think the food and drink references are weird, but I guess it works: “When you’re hungry, I will fill you up / When you’re thirsty, drink out of my loving cup.”

To make my album ratings easier, I’ve decided to tally how many tracks on the album I enjoyed; I got this idea from 2loud2oldmusic, so check him out! I liked 8 out of the 12 songs (“Something for the Pain” and “These Days” got half points), that’s about 67 percent. With that in mind, I’ll give These Days 3 out of 5 stars because I wish they spread out the singles on the album because it does seem a bit front-ended; even the latter songs I liked on the album weren’t as strong as the earlier tracks. Also, the songs I didn’t like left a bad feeling in me. But don’t let me stop you from checking out These Days because it’s still better than anything the band has released since Sambora left!

Comment below your favorite song from Bon Jovi’s These Days album!

45 thoughts on “‘These Days’ Is Still Better Than Current Bon Jovi! | Album Review”

Earlier this week, one of my WordPress friends, @mikeladano, asked if I could review an EP for a Canadian rock band called Max the Axe. So, I said yes! 👍 It’s called ‘Oktoberfest Cheer’ (2021) and it’s very punk rock, except the singer can actually sing! 😂 All of the musicians on this EP are extremely talented. There are only three songs and it’s under 10 minutes, so the EP goes by fast. 🕑 Head over to my blog now to read the full review (link is in my bio)!
First of all, Savage is such a bada** name for a band. 👍 Second of all, they are the most obscure band I’ve ever covered on my blog so far. This album ‘Loose ‘N Lethal’ was released in 1983 and was part of the new wave of British heavy metal (NWOBHM). 🎶 Most of the songs aren’t bad, but the heavily distorted guitars can be rough on the ears and the production is not very good. However, I love the rebellious and “not giving a care” vibe that the album was going for. Head over to my blog now to read the full album review (link is in my bio)!
The 2021 MTV Video Music Awards (VMAs) got me thinking about all of the terrible music videos I’ve seen throughout the years. 👎 However, in my most recent blog post, I decided to talk about 10 music videos that I don’t hate! 👍 Head over to my blog now to read the full post (link is in my bio)!
Before you say anything, this album cover is not nearly as bad as the original ‘Virgin Killer’ (1976) album cover. So, you guys should thank me for saving your eyes! 👀 Ok, but seriously, I had no expectations for 'Lovedrive' (1979). I just bought it because the Scorpions are going to be in Vegas in 2022 and I wanted to check out one of their studio albums before deciding whether or not to buy tickets for them. 🤷‍♀️ “Always Somewhere,” “Loving You Sunday Morning,” and “Is There Anybody There?” are the standout tracks for me. Head over to my blog now to read the full album review (link is in my bio)!
Once upon a time, I had tickets to see Harry Styles live in Las Vegas. Unfortunately, my family had to cancel the trip due to my dad not feeling well and the rising COVID-19 cases on the mainland. 😡 I’m not that bummed about it because I only bought those tickets to see part of One Direction (1D) live; it’s not like I enjoy Styles’ current music anyways. 😐 I wish I was able to get a refund though; the platform I bought the tickets from doesn’t allow refunds. Head over to my blog now to read the full story (link is in my bio)!
Thanks to Covid, I’ve been stuck at home all day. So, what do I rely on for entertainment? 🤔 YouTube, of course! Last year, before the pandemic started, I talked about whether or not YouTube is a distraction or a lifestyle, so this post is a follow-up to that previous one. Since I have absolutely nothing to do all day, my YouTube addiction has gone through the roof. 🤦‍♀️ Head over to my blog now to figure out how my addiction went from mild to extremely bad throughout the past year and a half (link is in my bio)! 💻