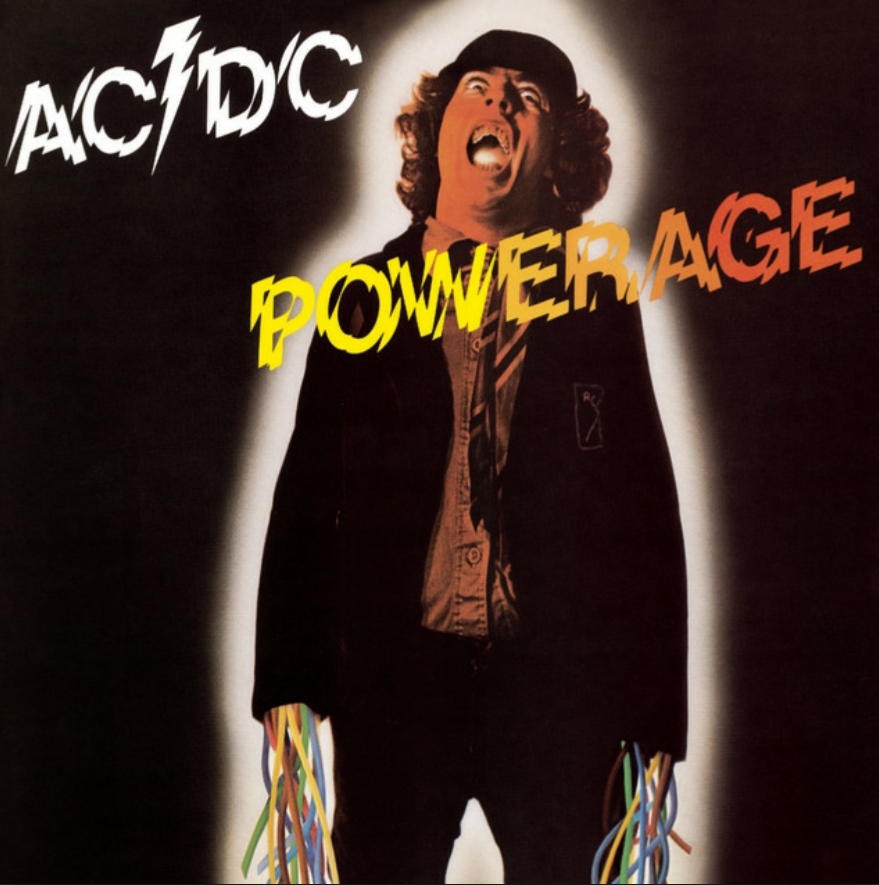 As soon as the malls opened up again, I went rushing to the Book Off because who doesn’t want cheap DVDs and CDs?!?! Nothing caught my eye in the DVD department, but the CD department was another story. I stumbled upon an AC/DC album titled Powerage (1978); I mostly bought it because the cover reminded me of Carrie (1976). Anyways, I was impressed with what I heard, and considering that Powerage was the first AC/DC album to feature Cliff Williams on bass, I knew I was in for a real treat! It’s also the fourth studio album released internationally and the fifth studio album by the band overall.

The album kicked off with “Rock ‘N’ Roll Damnation;” though this wasn’t my favorite chorus by the band, the maracas throughout the song made up for it. “Down Payment Blues” has one of the best guitar solos on the entire album; the guitars were so tasteful, and I love the partnership between Malcolm and Angus Young for rhythm and lead guitar. Malcolm does the main riff, almost like the melody, while Angus does the crazy stuff, and they blend so well together! Rest in peace Malcolm Young; you were such a cool dude and an incredible musician.

Bon Scott had a unique way with words, the most iconic ones for this song being “I know I ain’t doing much / Doing nothing means a lot to me.” Rest in peace, Bon Scott; thank you for your contribution to AC/DC in the early years.

The best part about “Gimmie a Bullet” is the chorus, “Gimme a bullet to bite on, something to chew / Gimme a bullet to bite on, and I’ll make believe / I’ll make believe it’s you.” Scott’s lyrics on this album showcase his ability as a songwriter with his tasteful, fun, and humorous way with words. “Riff Raff” is the perfect blend of heavy drums and wild guitar solos. Phil Rudd has a simple way of playing drums, but he adds the right amount of flavor to where they need to be! “Sin City” again wasn’t my favorite chorus, but the bass, drums, and guitar do have their moments to shine sometime throughout this track.

“What’s Next to the Moon” is notably known for its references to Casey Jones and Clark Kent, aka Superman. But the standouts for me were the backing vocals by Malcolm and Williams and the metronome-like, heart-pounding drumming by Rudd.

“Gone Shootin'” and “Down Payment Blues” have the best riffs on the entire album; I think they really emphasize the sloppy and groovy aspect of blues-rock. I find it better to listen to both of these songs live. Going back to Rudd’s simple way of playing, he knows how to work a hi-hat and gives it a swing (not even sure if that makes sense, but work with me)! The original studio version of “Gone Shootin'” doesn’t have much hi-hat, you can hear the drums loud and clear, and the guitar parts sounded very clean. Whereas live it’s more open and airy, but it’s raw and real! The main riff itself is memorable and timeless.

I fell in love with “Up to My Neck in You” when I first heard it on the Stiff Upper Lip concert, but Scott’s vocals gave it more of an edge! I watched a Behind the Music episode on AC/DC a few weeks ago, and it showed a pic of Scott with a missing front tooth. So every time I hear “Kicked in the Teeth,” I think of that pic. Not only was it tongue-in-cheek, but Angus Young’s wild guitar solo, Phil Rudd’s drumming, and Bon Scott’s screaming vocals made it a great way to end the album!

I’m glad I gave Powerage a chance because everyone knows Highway to Hell (1979) and Back in Black (1980), so it was nice giving this underappreciated gem the credit it deserves!

Let me know what your favorite track is from Powerage in the comments below!