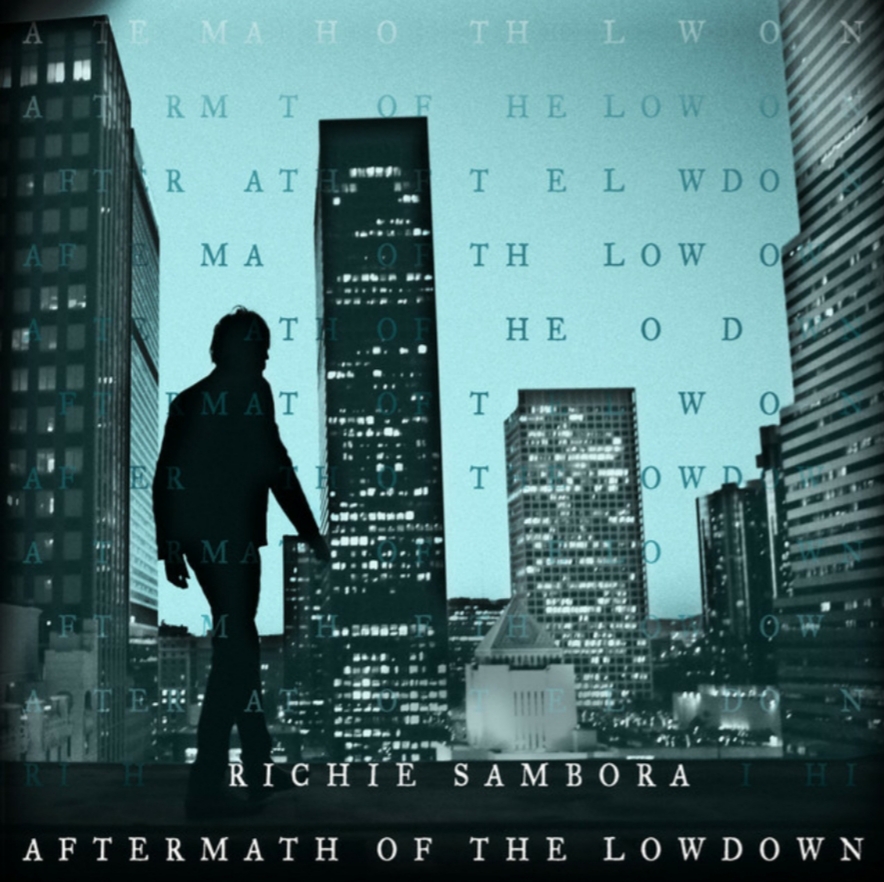 We have come to an end with the Richie Sambora album reviews with his third album, Aftermath of the Lowdown (2012). Let’s hope he releases a new solo album soon because this album is incredible! I already have more than half of the songs on my Spotify playlist. This album showed a more honest side to Sambora, as he tackled his experiences with substance abuse, his divorce, being a single dad, losing his father from cancer, etc.

It contains some pretty heavy stuff. But instead of being a sad album, this was more of a triumph and a celebratory album. He’s coming to terms with his past and taking on the world by storm! Let’s dive right into it because I have a lot to say about this album.

Unlike the previous two solo albums, which focused more on blues-rock, Aftermath of the Lowdown centered around the hard rock genre. I heard parts of the album on Spotify by accident, and I liked what I was hearing. I loved “Burn That Candle Down” because it was tough and an in-your-face type of thing with the riff, the drums, and the lyrics. According to an interview Sambora did with Absolute Radio in 2012, “Burn That Candle Down” started as a sex song, but it got a dark meaning due to the wars and protests happening back then.

If I’m not mistaken, “Every Road Leads Home to You” was the lead single for the album, not that I’m complaining; it’s a great song! Though I found it very funny when the track started with “I got your picture on my phone” because his last album was back in 1998, so it shows how much technology has advanced and times have changed since then. Sambora has a great way with words. His lyrics are so beautiful. I love that one line, “When the bridge is burning, And I’m losing my faith, And I’m trying to find my way towards the truth.” I heard an acoustic version of this song with a violin; it was very stripped down, and his vocals were incredible on that.

“Every Road Leads Home to You” is one of the tracks that’s written about Sambora’s daughter, Ava Elizabeth Sambora. But it can be interpreted to be about someone else, whether it’d be your significant other or even your dog! I love how hopeful and motivational Sambora’s songs are. Anyone can relate to the lyrics. In “Taking a Chance on the Wind,” my favorite ones are “Every heartache was a blessing, every knockdown was a spark” because that could not be more true in every way.

“Nowadays” is probably the most hardcore song on the entire album. It was loud and had a great beat, so I was a fan of it for sure! Sambora’s vocals sounded so different, almost too perfect to be true. Especially in the verses because they were youthful if that makes sense. With all the touring Sambora has done throughout his career, it’s easy to stop to observe the scenery and the events happening in different cultures. Like nowadays, you never know who you can or cannot trust with the protests and such. “It’s written from the point of the observer,” Sambora mentioned in 2012.

“Weathering the Storm” wasn’t my favorite song on the album, but hear me out. It’s still a good song! The vocals were great, loved the guitar solo, beautiful piano composition, I liked the transition into the chorus, when all the instruments came in, and lovely lyrics. Bernie Taupin, best known as the songwriter for Elton John, wrote “Weathering the Storm” with Sambora. I didn’t expect such honest and straight-forward lyrics, which is why I’m not a fan of the song. I enjoyed some of the lyrics, though, and it worked for Sambora, so that’s all that matters.

“Sugar Daddy” is my favorite song on the album, and I don’t know why. Either way, it was fascinating to hear Sambora say the words “sugar daddy”! With his divorce, Sambora didn’t want to commit to anyone. But he still wanted to date and have fun. Like you could do whatever you want with me as long as I could do the same with you kind-of-thing.

“I’ll Always Walk Beside You” is one of my favorites on the album because I’ve developed a weird relationship with this song ever since I found out that Sambora left Bon Jovi. I was trying to figure out why he left Bon Jovi, what went wrong, and how he’s doing now. I know the album came out before Sambora left the band, but I looked at the song as a message to his fans. He’ll always stay by their side, despite the changes that have happened in his career. In actuality, though, “I’ll Always Walk Beside You” is another song about Sambora’s daughter, Ava.

In the same interview with Absolute Radio, Sambora recalled how he came up with the song title. “I went into my daughter’s room to get a pen, to grab one of her pens to actually write with. And so I gave her this picture of her and I when she was a little girl when she was about three years old. And um, we were walking down my hometown street together, and I wrote on it, ‘I will walk beside you forever, Love dad.’ And I was having a hard time conjuring up what to write about that day, and I say, ‘well there’s a title,’ and then it wrote itself!”

“Seven Years Gone” depicts the struggles Sambora had faced and how much has changed within the last seven years of his life (leading up to the album, of course). I watched a video of him performing this song on The Late Late Show With Craig Ferguson in 2012, and I felt at ease watching Sambora sing and hearing the emotion and passion in his voice. One of my favorites in his whole career, besides “Stranger In This Town.” “Learnin’ How to Fly With a Broken Wing” had me shook because I never knew Sambora had it in him to make such a hardcore rock album. I’m so used to his bluesy style of the first two albums and his backing vocals with Bon Jovi.

I had trouble figuring out what “You Can Only Get So High” was about until I watched some interviews from 2012, and Sambora mentioned that the song is about substance abuse, which I can see now. But I feel like people who are suffering from other problems can relate to it too. Like bad relationships, especially with the lyrics, “You can only hurt so many times. Before the truth falls from the lie.”

“World” reminded me of “Love” by Def Leppard, which was from their Songs from the Sparkle Lounge (2008) album. The melody and the feel of both songs were so similar. Before the drums kicked in for “Love,” that is. Some people commented on YouTube that “World” featured some influences from Queen and The Beatles. Sambora’s vocals were so calm and peaceful in this song, so relaxing that I didn’t want it to end!

Usually, I don’t have a lot to say about every song on an album, so I was in for a real treat reviewing all three of Richie Sambora’s albums. They were all great albums, but the Aftermath of the Lowdown album shocked me the most because of how different it was. Also, with how much Sambora’s voice has changed since the 90s. He has the edge to do tough-in-cheek fast rock songs, and he has the softness to do heartfelt ballads. Yeah, I have no complaints about this album; the vocals were phenomenal, anyone could connect with the lyrics, every instrument did their part, and Sambora’s musicianship was excellent!

If you have not done so, please listen to Richie Sambora’s Aftermath of the Lowdown. Listen to all of his solo albums, including Stranger In This Town (1991) and Undiscovered Soul (1998), and I promise that you won’t regret it.