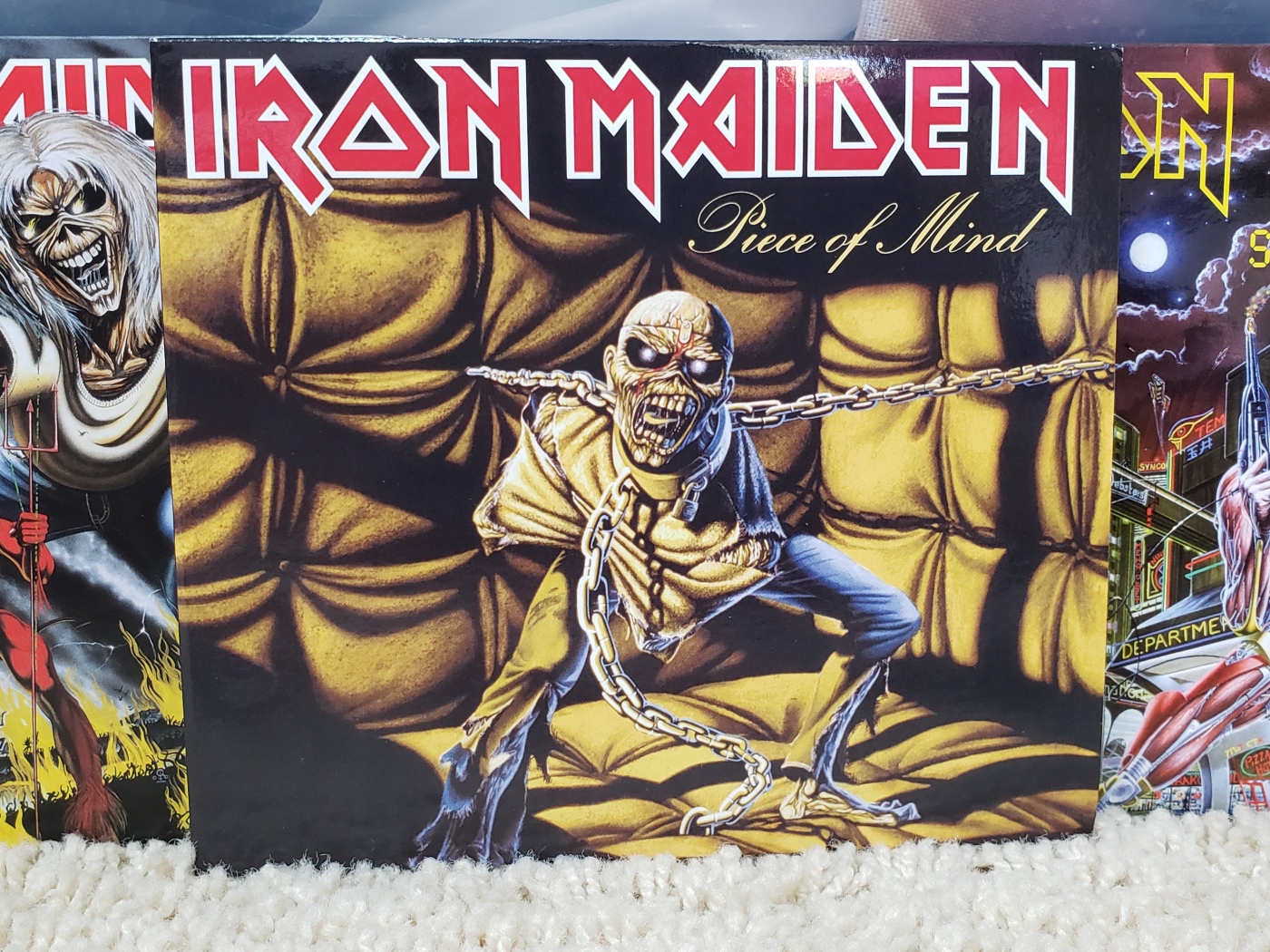 I first heard “Where Eagles Dare” on a playlist video on YouTube and because she didn’t want to get blocked for copyright, I only heard about 15 seconds of the song. I thought it sounded alright, if it was loud and had a good beat, then I liked it, so I downloaded it to my Spotify playlist the next day. Then when I went out for a walk around the neighborhood not long afterwards, I got bored and I took the song off my playlist as soon as I got home (or something like that, forgive me, this was early during the pandemic last year). Bruce Dickinson is singing the lyrics so fast that I need a lyric book to make out what he’s singing, and half the song is lyrics, while the other half is a long instrumental repeating the same melody over and over again. Yeah, it’s not good!

“Revelations” slowed things down a bit, it was very moody, it had a nice bass riff, and great storytelling lyrics. You know, the stereotype is that rock musicians sing about sex, drugs, and rock and roll, but not Maiden, instead, they sing about “the light of the Blind” and “the eyes of the Nile.” Speaking of storytelling lyrics, listen to this: “Now the crowd breaks and a young boy appears / Looks the old man in the eye / As he spreads his wings and shouts at the crowd / In the name of God my father I fly.” That song, “Flight of Icarus,” has a headbanging feel, that it’s impossible not to do so. Dickinson sounds great and the guitar solo screeches some high notes that are out of this world!

This is going to sound strange but “Die With Your Boots On” reminds me of the DreamWorks Animation film titled Puss in Boot (2011). Even though those are two completely different things, I will forever associate those two together because they both have boots in the title. Honestly, the song is neither good nor memorable; the driving force of the song was the bass riff, which was cool, but the lyrics were lazy as they kept repeating “if you’re gonna die, die with your boots on.”

Though the main guitar riff in “The Trooper” is annoying as heck, I have a soft spot for that track. About mid 2018 to early 2019, I discovered “The Trooper” on a music reaction YouTube channel, Andy and Alex, and I became fascinated with that track. I knew it was sometime before graduation period because on the way to a high school graduation on my mom’s side of the family, my aunty was in the car and I played that song on Spotify (with earbuds) so that she wouldn’t talk to me, haha. At the time, I grew to love music from AC/DC, Mötley Crüe, Def Leppard, Iron Maiden, and Bon Jovi because rock music was my escape from the modern world of annoyance (it still is).

“Still Life” is an interesting one because I don’t hate it, yet, it feels like the verses drag on forever and despite Dickinson screaming “NIGHTMARES,” it’s very mellow and laid back. The guitar solo was ok, Harris’ bass riff wasn’t the driving force, instead, it was supporting the guitars, and McBrain’s drumming was very light. “Quest for Fire” has a lazy chorus, but I love the drum intro and outro, and the bass was the highlight of the track. One thing that annoys me about Maiden’s tracks is that they rush out a bunch of lyrics and then they do a massive, long instrumental section because they don’t have much lyrics left to sing other than the chorus one more time. That’s what happened with “Quest for Fire,” but I still like it because Maiden sang about dinosaurs (“in a time when dinosaurs walked the earth”).

“Sun and Steel” is ok; to be honest, I feel like the melody got too happy in the chorus. Even though the lyrics describe a man killing someone at 13 and learning how to fight at 16, it felt like I was in heavy metal la la land. “To Tame a Lamb (I mean Land)” ended the album and it felt like three different songs. Dickinson was rapping the verses and it kind of had a hip hop feel (in my ears), then he got all moody and inspirational, and finally, there was this bloody instrumental section that went on for over three minutes; you can be the judge of whether or not I liked “To Tame a Land.”

Piece of Mind didn’t meet my high expectations but that’s because I like songs better when I don’t read the lyrics. There’s more pressure reviewing an album because you have to critique it, so it has to be a special album in order for me to like it under all that pressure. I think the album is overhyped because besides “The Trooper,” “Flight of Icarus,” and “Revelations,” the songs lacked the special wow factor! While I give this album props for being McBrain’s debut with Maiden, the instrumental sections and guitar solos were not memorable and sounded ordinary to me. With all that said, I’d give Piece of Mind a 3.5 out of 5 stars.

Let me know in the comments below what your favorite song is from Iron Maiden’s Piece of Mind album!